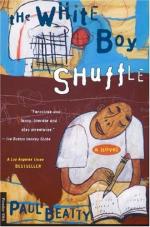 Paul Beatty
This set of Lesson Plans consists of approximately 140 pages of tests, essay questions, lessons, and other teaching materials.

1. What does Gunnar learn the recruiter from Harvard will get if Gunnar signs with him?

2. What does Gunnar say to Psycho when he offers Gunnar some valuable loot?

3. What is the commotion Gunnar notices when he leaves a man's house after watching television there?

4. What does Gunnar's coach tell him one morning?

5. How is Gunnar's bride attained?

1. Who arranges a marriage for Gunnar and how does he come up with a bride? Where does the wedding take place?

2. What happens when Yoshiko goes into labor?

3. What does Gunnar see when they finally get out of practice in Chapter Seven and how does he learn what is happening?

4. What does Gunnar say to the reporters about suicide?

5. What does Coach Shimimoto do and say when he keeps the team longer at practice in Chapter Seven?

6. What happens when Gunnar leaves his creative writing class in Chapter Ten when Gunnar is going home?

7. Who comes to talk to Gunnar about his speech the next day and what do they ask him about?

8. What does the recruiter from Boston University do to woo Gunnar?

9. Where is Gunnar's wedding reception and where does he go for a honeymoon?

10. When does Gunnar's wedding take place and who performs the ceremony?

5. What type of plot do you think A Single Shard is? Explain your response.

1. Trace and analyze the theme of growth in The White Boy Shuffle. Consider the following questions as you write: What characters are most concerned with growth? Why? What are some symbols of growth? Symbols of rigidity? What characters seem rigid?

3. Trace and analyze the theme of tradition in The White Boy Shuffle. What is Gunnar's view of tradition? Gunnar's mother? Nick's? Gunnar's father. Why is tradition important to some characters? Is anyone willing to abandon traditional viewpoints? Who? What are the positive and negative sides to holding fast to tradition?

1. Choose two significant symbols and trace and analyze their appearance in The White Boy Shuffle. Are these universal symbols? Would they be understood in any culture? Are there other symbols that would portray the same idea? What are they? Why do you think Beatty chooses the symbols he does? Do you think Beatty consciously decides upon the symbols to represent various elements of The White Boy Shuffle? Why or why not.

2. Choose two important metaphors and trace and analyze their appearance in The White Boy Shuffle. Are these universal metaphors? Would they be understood in any culture? Are there other metaphors that would portray the same idea? What are they? Why do you think Beatty chooses the metaphors he does?

3. Discuss Beatty's use (or lack ) of literary device (such as foreshadowing, clifthangers, deux ex machina, etc...), and how they add or detract from the story. Does Beatty use too many or too little literary techniques? State to which of the five major elements of fiction the literary device is related (style, character, plot, setting, theme).

More summaries and resources for teaching or studying The White Boy Shuffle.