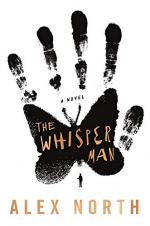 Alex North
This set of Lesson Plans consists of approximately 186 pages of tests, essay questions, lessons, and other teaching materials.

1. Who tells Norman Collins that his fingerprints have been found on the weapon used to murder Dominic Barnett?
(a) Pete.
(b) Amanda.
(c) Dyson.
(d) Colin.

2. As Pete is driving toward a particular destination at the start of Chapter 35, he hears what object "calling to him" (185)?
(a) The cuckoo clock.
(b) The cocktail shaker.
(c) The kitchen cabinet.
(d) The cooking sherry.

6. What does Pete do with the vodka he pours into the tumbler near the end of Chapter 35?
(a) He pours it back in the bottle.
(b) He drinks it.
(c) He offers it to Karen.
(d) He pours it down the sink.

7. Who tells Jake in Chapter 46 that he is correct to be frightened?
(a) Mister Night.
(b) The girl in the checked blue-and-white dress.
(c) Adam.
(d) Rebecca.

8. Pete tells Amanda in Chapter 25 that which character had been brought in for questioning 10 years before due to his odd behavior?
(a) Frank.
(b) Norman.
(c) Tom.
(d) Dyson.

15. In Chapter 49, Pete develops a hypothesis about Frank Carter's modus operandi of manipulating what objects at the scenes of his murders?
(a) Knives.
(b) Zip ties.
(c) T-shirts.
(d) Socks.

1. Tom discovers at the very end of Chapter 52 that which character is no longer in Tom's house?

2. Toward what location does Pete drivea at the start of Chapter 35?

3. From whose perspective are the events of Chapter 44 presented?

5. What is the house number of the house on Garholt Street that Norman Collins once tried to buy?