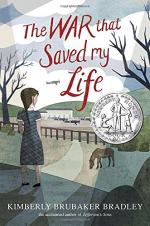 The War That Saved My Life Fun Activities

Read the sequel The War I Finally Won, that continues Ada's story.

Write 10-20 questions that you would ask the author if you could interview her.

Create a diorama of the apartment where Ada spent her entire life until she was evacuated to the country.

Draw a portrait of Miss Smith, Ada, and Jamie.

Discuss with a group how Ada encounters a new world when she leaves the apartment. Why is everything such a challenge for her outside of the apartment?

Create a menu of foods that might be served for dinner when food was scarce during World War I.

Discuss rationing with a group. Discuss what you would miss the most if you had to deal with rationing.

Research Anderson Shelters. Write a few paragraphs describing what you learned. Include a photograph or drawing of...

More summaries and resources for teaching or studying The War That Saved My Life.

The War That Saved My Life from BookRags. (c)2021 BookRags, Inc. All rights reserved.