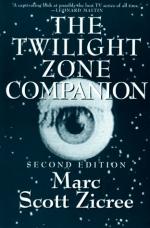 This quiz consists of 5 multiple choice and 5 short answer questions through Part Seven: The Fifth Season 1963-1964, Part Eight: After The Twilight Zone.

1. What was Bert Granet determined to do?
(a) Get rid of Serling completely.
(b) Put out the best show possible for the fifth season.
(c) Become famous from this series.
(d) Have the show cancelled.

2. What commonly happened in syndication?
(a) Parts of scenes were deleted.
(b) Entire scenes would be deleted.
(c) The episodes were shown just as they had originally been shown.
(d) Episodes would not be seen in order.

4. In 1953, when Serling's work appeared on television, how did the critics respond?
(a) They raved over his work.
(b) Negatively.
(c) There was very little response.
(d) They thought his work was mediocre.

5. It became obvious that by the end of the fourth season "Twilight Zone" had begun to do what?
(a) Become more popular.
(b) Tire the CBS executives.
(c) Annoy audiences.
(d) Show its age.

3. About what is "The Thirteenth Mannequin?"

4. Serling noted that one begins to borrow from whom?