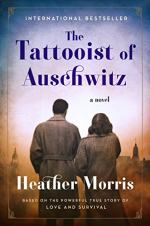 Heather Morris
This set of Lesson Plans consists of approximately 180 pages of tests, essay questions, lessons, and other teaching materials.

1. What classification do Victor and Yuri fall into?
(a) They are Jewish prisoners.
(b) They are political enemies of Germany.
(c) They are gypsy workers.
(d) They are paid laborers.

2. What color is the flower that Lale sees by the railroad track the day that Leon is taken away?
(a) Blood-red with a black center.
(b) Pure white with yellow powder in the center.
(c) Bright yellow with a brown center.
(d) Soft pink with a rose-like smell.

3. What has happened to Gita's parents?
(a) They have been killed.
(b) They converted to Catholicism to escape persecution.
(c) They are still living in Gita's childhood home.
(d) They escaped to America.

4. What building are Victor and Yuri working on when Lale first meets them?
(a) Medical Hall Three.
(b) Administration Building.
(c) Crematorium One.
(d) Canada Warehouse.

5. What does Lale have stashed inside his jacket pocket?
(a) False papers.
(b) Extra food.
(c) Money.
(d) Photographs of his family.

1. What number is tattooed on Lale's arm?

2. What does Gita say about the object that Lale tries to give her?

3. According to Baretski, what event is going to happen that will cause Lale to get extra rations?

4. Who was the commander of the camp where Lale was taken?

5. Who pulled Lale off the death-cart?

1. Why does Baretski tell Lale that he and others will be receiving extra provisions and extra blankets?

2. How did Lale learn to flirt?

3. What act of kindness does Gita do for Mrs. Goldstein?

4. What happens to the prisoners that Lale sees loaded onto the bus shortly after he arrives at the camp?

5. What is the irony of the meaning of Nayda's name?

6. Who is Hilda Goldstein and what news does she bring Gita?

7. What group of people wear the green triangle and what kind of people are they?

8. What is Lale's final act of rebellion upon arriving at the camp?

9. How do Gita's cellmates keep her alive when she is ill?

10. Why did Lale volunteer to go to the Germans?

More summaries and resources for teaching or studying The Tattooist of Auschwitz.

The Tattooist of Auschwitz from BookRags. (c)2022 BookRags, Inc. All rights reserved.