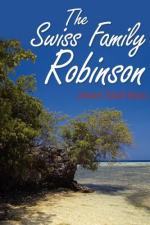 3. In Chapter 14, "A Casualty," what food do the boys persuade Elizabeth to cook and then find disgusting?
(a) Rhinoceros horn.
(b) Shark fin soup.
(c) Elephant ear.
(d) Whale tongue.

5. In Chapter 13, "Unpleasant Tasks," what new construction particularly pleases Elizabeth?
(a) A new roof for Falconhurst.
(b) An aqueduct to bring fresh water to Rock House.
(c) An indoor fireplace at Rock House.
(d) A separate shelter for the animals at Falconhurst.

10. In Chapter 18, "Repairs and Fortifications," what work is being done at home while the boys go off to the Gap?
(a) They are smoking boar meat.
(b) They are harvesting bamboo.
(c) They are repairing damage to the pinnace.
(d) They are building a sugar mill.

11. Chapter 12, "Anniversary," what creature does the family discover has nearly destroyed their farm?
(a) Monkeys.
(b) Goats.
(c) Elephants.
(d) Pigs.

12. In Chapter 17, "Bounty and Peril," what reason does the narrator give for allowing Fritz to travel ahead alone in the kayak?
(a) There is really no danger that Fritz is likely to run into.
(b) Fritz has proven that he can make good judgments on his own.
(c) Fritz is showing independence.
(d) There is not enough room on the pinnace for both Fritz and his boat.

13. In Chapter 15, "We Explore Inland," how does Jack react to the noises that Fritz and the narrator make inside the cave?
(a) He is frightened and bursts into tears.
(b) He thinks they are in danger and rushes inside.
(c) He runs away and gets lost in the swamp.
(d) He yells into the cave and then fires his gun.

1. In Chapter 10, "Changing Seasons," what does Ernest train Knips to do?

2. In Chapter 11, "Our Estates," what does the narrator teach the boys to make from birch trees?

3. In Chapter 12, "Anniversary," what plan does Elizabeth object to?

4. In Chapter 11, "Our Estates," what new outpost does the narrator propose?

5. What does the family build around the roots of the tree that supports Falconhurst?

More summaries and resources for teaching or studying The Swiss Family Robinson.