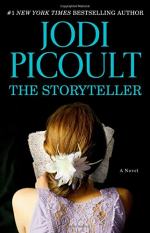 Jodi Picoult
This set of Lesson Plans consists of approximately 116 pages of tests, essay questions, lessons, and other teaching materials.

Write an obituary for Minka.

Bake Minka's Rolls using the recipe in the back of the book.

Write an explanation for why Sage always tried to hide her scar.

Discuss with a group what type of obituary appeared in the local paper for Josef.

Write your ending to Ania's story.

Write ten questions that you would ask Picoult if you could interview her.

Compare yourself to a character in the novel.

Discuss with a group the role of religion in the novel.

Discuss with a group the reason why Josef wanted someone to kill him rather than just commit suicide.

Draw a picture of Sage.

Write a diary entry that Sage's mother might have written.

Create a cover for the book.

The Storyteller - The Movie

More summaries and resources for teaching or studying The Storyteller (Jodi Picoult).