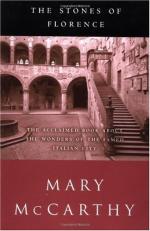 Mary McCarthy
This set of Lesson Plans consists of approximately 110 pages of tests, essay questions, lessons, and other teaching materials.

1. According to Chapter 6, what color is prominent in the paintings of the "springtime painters"?

2. According to Chapter 6, what are the two extreme images in Florentine painting?

3. According to Chapter 6, which month is the "classic Florentine 'month'"?

4. Which artist had originally attempted a sculpture with the piece of marble that Michelangelo used for the "David"?

5. Who performed the "egg trick" described in Chapter 5?

1. Why was Andrea del Castagno thought to be evil?

2. Why did Machiavelli favor an army composed of citizens?

3. Describe the operation and purpose of the gnomon in the Duomo.

4. Describe the month of May in Florence.

5. What were the ramifications for an artist who became a Piagnone?

6. Compare the work of Brunelleschi to Greek philosophy.

7. Describe the origin of the phrase "as round as Giotto's O."

9. Explain the author's meaning in her assertion that Florentine painting "had a sweet tooth."

10. Describe the event that occurred in 1304 to make the Florentines believe judgment was near.

Discuss the symbolic value of the Florentine tower.

Describe Florentine culture in detail. Choose a character from the book and describe how he or she does or does not fit within that culture. Try to be as detailed as possible in your description.

Explain the relationship between science and art in the early Renaissance in Florence, including mention of some of the main artists and works of art involved.

The Stones of Florence from BookRags. (c)2022 BookRags, Inc. All rights reserved.