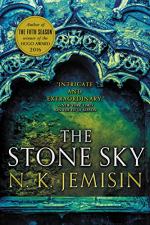 This quiz consists of 5 multiple choice and 5 short answer questions through "14: I, at the end of days"-“Coda: Me, and You”.

1. Why were the tuners surprised by the Plutonic Engine in the museum?
(a) It was made for war.
(b) It was made for artistic purposes.
(c) It had a seditious message hidden in its paint.
(d) It spoke to them.

2. What does the Earth do to mark its peace treaty with humanity?
(a) It lets out a celebratory volcanic eruption.
(b) Writes a message on the moon.
(c) Releases the captive souls from its core.
(d) Speaks to humanity in Earth-Speak.

3. What powered the briar patch at the amethyst obelisk's socket?
(a) A nuclear generator.
(b) Solar panels.
(c) An obelisk.
(d) Captive Niess and tuners.

4. What purpose does Schaffa give for taking the orogenes from Found Moon?
(a) Punishment.
(b) A reward.
(c) Building a new house.
(d) A training exercise.

5. Who attacks Essun and the others as they go through the Earth with Hoa?
(a) Tuners.
(b) Stone eaters.
(c) Orogenes.
(d) Guardians.

1. Which body part does Essun allow to turn to stone when she is forced to use orogeny in the stone forest?

2. What does Nassun call Schaffa to shake him out of the stupor he enters after she powers the Station?

3. From where is Hoa narrating the novel?

5. What is the food situation when Castrima first arrives in Rennanis?