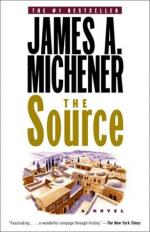 James A. Michener
This set of Lesson Plans consists of approximately 154 pages of tests, essay questions, lessons, and other teaching materials.

1. After Governor Jeremoth has the walls of Makor rebuilt, what group is able to breach the wall and capture Makor?
(a) Babylonians.
(b) Canaanites.
(c) Egyptians.
(d) Hebrews.

2. In "The Voice of Gomer," why are the Hebrews facing reprisals from Yahweh?
(a) For sailing to Turkey.
(b) For their stubbornness.
(c) For eating lamb.
(d) For leaving Babylonia.

3. Why does Urbaal buy a statue of the goddess Astarte?
(a) To protect his home and children.
(b) To protect his flock of sheep.
(c) To help his wife be fertile.
(d) To help restore his health.

6. After Meshab becomes a free man, who gives orders to have him killed?
(a) Queen Bathsheba.
(b) King Solomon.
(c) King David.
(d) Queen Isis.

7. Why do the early inhabitants of Makor talk about building a dike?
(a) To separate their land from their neighbors'.
(b) To protect their wheat against floods.
(c) To create a bridge between islands.
(d) To store irrigation water.

9. When the general Vespasian is sent to crush the Jews of Makor, what does the now much older Yigal say his people must do?
(a) Resist the Romans again.
(b) Assasinate the general.
(c) Submit to Roman rule.
(d) Escape to Jerusalem.

10. After Roman armies overtake the town of Makor, what happens to Yigal?
(a) He escapes.
(b) He is thrown into the lions' den.
(c) He is crucified.
(d) He dies of a heart attack.

12. Zadok and his people follow El-Shadai's orders and cross the Jordan into the land of:
(a) The Canaanites.
(b) Isaac Naphtali.
(c) The Hebrews.
(d) Epher Ibsha.

1. By 167 B.C.E., what additional religion has been introduced in Makor?

3. Why does Menalaus have his circumcision reversed?

4. After Yahweh tells Gomer to take her son to Jerusalem, what does the widow suspect?

5. Under the leader Uriel, Makor is prosperous, having developed a monetary system utilizing what?