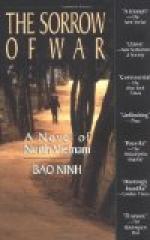 The Sorrow of War: A Novel of North Vietnam Test | Final Test - Medium

Bao Ninh
This set of Lesson Plans consists of approximately 96 pages of tests, essay questions, lessons, and other teaching materials.

1. Where does the narrative of Part Four start?
(a) From Phuong's point of view
(b) With Kien writing
(c) With Kien fighting
(d) Before Kien was born

2. What does Kien do with the culprits of the farmhouse killing?
(a) He runs away
(b) He bribes them
(c) He executes them
(d) He doesn't execute them

1. What almost happens between them?

2. What musical instrument was Phuong especially good at?

3. What does Kien discover about his fathers painting when he goes to warn him?

4. What did one particular friend think was the worst thing that could happen to a soldier?

5. What was Kien's mother devoted to?

1. What does Kien hallucinate about his nurse in Hanoi?

2. At what bar does Kien meet the young prostitute and other ex-soldiers from the war?

3. Why was it lucky that Phuong and Kien missed the train just as war started?

4. Why does Kien kill the Sailor on the Train?

5. Why is Kien ridiculed by his fellows in the post war period?

6. What is the significance of the tram driver who takes Kien home from the cafe?

7. What was Phuong forced to become?

8. What happens to the train that Kien and Phuong eventually catch so that he can return to his unit?

9. Why does Kien not kill the commandos responsible for the farmhouse massacre?

10. Why is the letter that Kien receives important?

More summaries and resources for teaching or studying The Sorrow of War: A Novel of North Vietnam.

The Sorrow of War: A Novel of North Vietnam from BookRags. (c)2022 BookRags, Inc. All rights reserved.