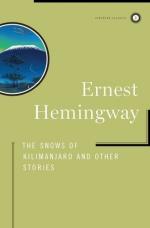 The Snows of Kilimanjaro Quiz | Four Week Quiz B

Ernest Hemingway
This set of Lesson Plans consists of approximately 145 pages of tests, essay questions, lessons, and other teaching materials.

This quiz consists of 5 multiple choice and 5 short answer questions through The Snows of Kilimanjaro.

1. Of whom does Harry think, “You said that you could write about these people; that you were not really of them but a spy in their country”?
(a) The very poor
(b) The very weak-minded
(c) The very noble
(d) The very rich

2. What composer does Harry say to his companion “wrote the words and music. This knowledge that you’re going mad for me”?
(a) Franz Joseph Haydn
(b) Stephen Sondheim
(c) Cole Porter
(d) Irving Berlin

3. Of Harry’s companion, the narrator says, “She loved anything that was exciting, that involved a change of scene, where there were new people and where things were” what?
(a) Pleasant
(b) Interesting
(c) Complicated
(d) A struggle

5. Who is described as having owned the guns in the log house that Harry describes to his companion as she dictates in the second half of the story?
(a) Harry’s great-grandfather
(b) Harry’s uncle
(c) Harry’s grandfather
(d) Harry’s father

1. How far does Harry recall driving by sled to town with the chore boy and the corpse of the man that beat the chore boy in his memories of the ranch?

2. What is Harry’s mistress’s reply when he says in the beginning of the story, “I don’t want to move. There is no sense in moving now except to make it easier for you”?

3. The author notes in the preface to the story that the frozen carcass of what animal lies close to the western summit of Kilimanjaro?

4. One of Harry’s flashbacks describes a trip for Anatolia. On this trip, Harry remembers making an attack with the newly arrived officers from where?

5. Near Harry and his mistress’s camp under the trees, the narrator describes a nearly dry water hole where what animals come to in the mornings?

The Snows of Kilimanjaro from BookRags. (c)2020 BookRags, Inc. All rights reserved.