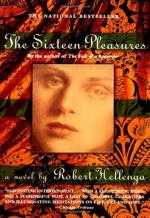 Robert Hellenga
This set of Lesson Plans consists of approximately 145 pages of tests, essay questions, lessons, and other teaching materials.

Setting as far as place and time play an important role in The Sixteen Pleasures. Discuss the following:

1. Compare/contrast several aspects of the setting of that time (1966s) from how it would be today. Consider things such as cultural norms/expectations, technology, religion and medicine.

3. Discuss some of the differences between the United States and Italy of the late 1960s, as far as the relationship between men and women and gender expectations. What are some similarities? (This essay topic will require some research).

The subject of marriage is woven throughout The Sixteen Pleasures. Discuss the following:

1. Discuss the idea of annulment versus divorce. Why would one seek...

More summaries and resources for teaching or studying The Sixteen Pleasures.