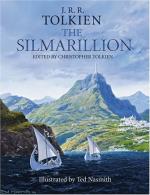 1. Describe what happens after Iluvator creates the Ainur to sing for him.

After Iluvator creates the Ainur to sing for him, each member of the Ainur sings alone, and then they begin to harmonize and compose a great song.

2. How is Iluvatar's creation of Ea described?

Iluvatar's creation of Ea is described as calling it the World that Is. Some Ainur stay with Iluvatar while others descend to Ea where they become Valar or the Powers of the World. They then create their own world called Arda.

3. How are the eight High Ones of Arda first described?

The eight High Ones of Arda are first described as being those in charge of Men and Elves in Arda. Each possesses a different power that included titles such as the Lord of the Waters, the healer, and the master of visions and dreams.

The Silmarillion from BookRags. (c)2022 BookRags, Inc. All rights reserved.