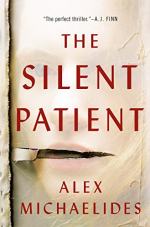 Alex Michaelides
This set of Lesson Plans consists of approximately 173 pages of tests, essay questions, lessons, and other teaching materials.

1. According to Theo in Part Two, Chapter Five, what did Alicia's attack on him signify?
(a) A sign of fear.
(b) A desire to communicate.
(c) A need for more medication.
(d) A hatred of Theo.

3. According to Diomedes' directive in Part Two, Chapter Fourteen, Theo must stick to what?
(a) The file.
(b) The facts.
(c) Playing detective.
(d) The confines of the unit.

7. What is the Grove?
(a) An apartment building.
(b) A rest home for the mentally ill.
(c) A secure forensic unit.
(d) Where the murder occurred.

8. What two investigative paths does Theo plan to follow in Part One, Chapter Eight?
(a) Alicia's education and career.
(b) Alicia's self-portrait and childhood.
(c) Alicia's medical and news reports.
(d) Alicia's family and marriage.

9. How does Christian view Theo's plan to help Alicia in Part Two, Chapter Three?
(a) As undermining his authority.
(b) As a waste of time.
(c) As illogical and irrational.
(d) As unfair to the other patients.

10. How does Theo injure himself when he is tormented by Kathy's emails in Part Two, Chapter Eight?
(a) He sprains his ankle while pacing.
(b) He cuts his finger on a broken wine bottle.
(c) He hits his head on a cabinet.
(d) He falls down the stairs while drinking.

12. According to Ruth in Part Two, Chapter Nine, what do people often confuse for love?
(a) Excitement and euphoria.
(b) Crisis and calamity.
(c) Strife and sorrow.
(d) Drama and dysfunction.

15. What is the subject of the painting Alicia made while on trial for murder?
(a) Gabriel.
(b) Her mother.
(c) Herself.
(d) A Greek heroine.

1. What information does Jean-Felix tell Theo in Part Two, Chapter Twenty about Alicia's relationship to her father?

2. When Theo views Alicia's painting of Gabriel on the cross in Part Two, Chapter Twenty, what does he notice around Gabriel's torso?

3. Where did Alicia go to do her painting?

4. Theo compares his life to what in Part One, Chapter Eight?

5. What does Alicia call her diary in the prologue to the novel?