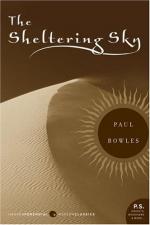 This character is an American writer who travels throughout Africa, has sex with an Arab prostitute, and later dies of typhoid.

This character is obsessed with omens of impending doom and has an inclination to drink into sedation before being kidnapped, imprisoned, and drugged.

This character travels around simply for the ride, and seduces a friend's spouse.

This character is an Australian with a slimy disposition who spends the novel making wild claims about past jobs and experiences in Africa, regularly asking strangers for money.

This character is a loud-mouthed, brash travelogue reporter with an aversion to foreigners.

This character is a young Sudanese merchant in the trade caravan who grows savage kidnapping a young woman and keeping her drugged in the basement.

This character is the saturnine commander of the French military...