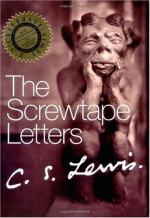 Sketch or describe your vision of the setting of Screwtape's individual office in Hell.

Sketch or describe Screwtape's attire while at work which befits a fiend of his stature.

Toadpipe is Screwtape's secretary who completes the writing of Letter # 22. Go to the file cabinet, retrieve Toadpipe's application and resume, and summarize Toadpipe's career and why he got the job.

Draw up a floor plan of Hell as you envisioned it while reading the letters.

Toadpipe the secretary has received a promotion. Help Screwtape write a want ad to recruit a replacement.

Three new fiends have joined with Wormwood. Name each of the three and their specialties. Provide a new assignment for each.

Screwtape makes the point that humans are protective of their time and ill-tempered if time plans are disrupted. Describe a scenario...

More summaries and resources for teaching or studying The Screwtape Letters.