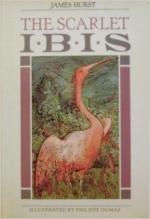 James Hurst
This set of Lesson Plans consists of approximately 85 pages of tests, essay questions, lessons, and other teaching materials.

1. What area is the ibis native to?
(a) The American South.
(b) Africa.
(c) Canada and the American North.
(d) South America to Florida

2. What does Brother know is covering the casket that he makes Doodle touch?
(a) Bird droppings.
(b) Spiderwebs.
(c) Cockroaches.
(d) Poison.

4. What does Brother say causes him to run home during the storm?
(a) Disappointment.
(b) Fear.
(c) Cruelty.
(d) Shame.

5. In the place name "Horsehead Landing," what does the word "landing" mean?
(a) A flat place between two flights of stairs.
(b) A dock or other place for boats to transfer people and cargo to land.
(c) A place where planes touch down.
(d) The annual size of a catch of fish from a particular body of water.

8. Even though it seems hopeless, why does Brother say he keeps trying to teach Doodle to walk?
(a) Pride.
(b) Anger.
(c) Love.
(d) Pity.

10. When the family sees Doodle struggling to bury the ibis, what is their response?
(a) They feel sad.
(b) Mama sends Brother out to help him.
(c) Daddy calls to Doodle to stop and come inside.
(d) They laugh at him.

11. Why does Doodle cry when Brother takes him to see the "only beauty" Brother knows (3)?
(a) Because he loves Brother.
(b) Because it is pretty.
(c) Because he has never seen flowers before.
(d) Because his life is too hard.

12. What does Mama notice about the ibis?
(a) It seems focused on Doodle.
(b) It is clearly dying.
(c) It seems to have a broken wing.
(d) It is not frightened of the family.

13. Where do Doodle and Brother imagine living when they are older?
(a) In a houseboat.
(b) Old Woman Swamp.
(c) In a treehouse.
(d) New York City.

14. What does the reader learn about Doodle from his story about Peter?
(a) Doodle is much smarter than Brother.
(b) Doodle has a vivid imagination.
(c) Doodle secretly hates Brother.
(d) Doodle is frightened of going to school.

1. What happens when Brother begins to dance Aunt Nicey around after they reveal that Doodle can walk?

2. What does the doctor say about Doodle trying to move around?

3. What is the narrative point of view of "The Scarlet Ibis"?

4. Just before they notice the ibis, what does Doodle contradict Brother about?

5. Why does Brother treat Doodle roughly when he first starts taking him outside in his cart?