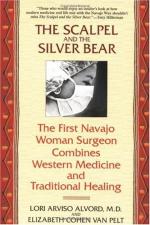 The Scalpel and the Silver Bear Test | Final Test - Easy

Lori Alvord
This set of Lesson Plans consists of approximately 100 pages of tests, essay questions, lessons, and other teaching materials.

1. What is the disease Florena had contracted after her surgery that may have caused her death?
(a) Influenza.
(b) Severe respiratory distress.
(c) Stomach virus.
(d) Nothing.

4. __________ have tried to eradicate the culture and the language of the Native Americans.
(a) Americans.
(b) Other tribes.
(c) Governments in New Mexico.
(d) Warring tribes.

5. Who is the person in Melanie's family that does not want to go ahead with the surgery?
(a) Grandfather.
(b) Grandmother.
(c) Mother.
(d) Sister.

7. During what month does Alvord find out she is pregnant, according to this section of the book?
(a) Sixth.
(b) Fifth.
(c) Fourth.
(d) Second.

9. Where does Jon end up asking Lori to marry him, as she is out visiting him during training?
(a) San Francisco.
(b) Fort Bragg.
(c) Mendocino.
(d) Gualla.

12. Alvord wants to remember her __________ during the surgical procedure in order to have more empathy for her patients.
(a) Happiness.
(b) Lack of control.
(c) Misery.
(d) Separateness.

14. Alvord tries to avoid a _________ disaster by ensuring the family makes the decision before the courts are called in.
(a) Medical.
(b) Ethical.
(c) Biological.
(d) Cultural.

1. What is the ceremony that Thomas has performed in the past, even though he is one of the youngest medicine men?

3. The eventual diagnosis for Florena is catastrophic ________, according to the records.

4. On what day of the induction do the drugs begin to work in Lori's body, according to the book?

More summaries and resources for teaching or studying The Scalpel and the Silver Bear.

The Scalpel and the Silver Bear from BookRags. (c)2022 BookRags, Inc. All rights reserved.