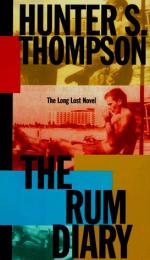 He is a reporter who has taken a job with an English speaking newspaper in San Juan, Puerto Rico.

He has been in San Juan longer than any of the others at the paper and he is bitter about the atmosphere in which he lives.

He holds off a whole group of angry men all on his own, impressing Paul with his bravery.

Shei s a beautiful girl Paul sees on line at the airport in New York.

He is on the verge of a nervous breakdown because he is having such a hard time keeping the paper from going under.

He once worked for the paper but is now a PR man for a prestigious company in San Juan.

He is technically the editor, but is on staff in order to make connections between...