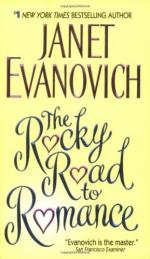 The Rocky Road to Romance Chapter Abstracts for Teachers

Janet Evanovich
This set of Lesson Plans consists of approximately 89 pages of tests, essay questions, lessons, and other teaching materials.

• Frank has a mishap on the road and swears on the air, getting cut off by the editor

• Reader meets Daisy Adams, a graduate student who works at WZZZ as the Dog Lady, dispensing recipes for dog food.
• Frank Menken has been in an accident and has broken his leg. Steve looks for a replacement but no one wants the job.
• Daisy begs for a shot at the traffic reporting job and Steve reluctantly accepts.

• Steve takes Daisy out on the road and while Daisy is utterly intimidated, Steve finds himself attracted to this quirky woman

The Rocky Road to Romance from BookRags. (c)2021 BookRags, Inc. All rights reserved.