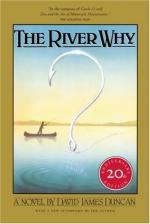 1. What book does Gus consider the most explosive in existence?
(a) Mythology.
(b) The Holy Bible.
(c) Darwin's Theory.
(d) The Big Bang vs. Evolution.

2. What happens to Gus on the Fourth of July?
(a) He stops fishing.
(b) He gets invited to a celebration.
(c) His family comes to visit.
(d) He catches his largest fish yet.

3. What does Gus do with his copy of Izaak Walton's book?
(a) He throws it out.
(b) He puts it on his father's shelf to gather cobwebs.
(c) He burns it.
(d) He gives it to his father telling him it is nonsense.

4. What does Gus do with the man he found in the water?
(a) He leaves him where he is and seeks help.
(b) He yells out to the woman who had been calling for him.
(c) He dives in after him and pulls him into the boat.
(d) He ties him to the canoe to bring him to the dock.

8. What is Bill Bob playing with when Gus finds him behind the cabin?
(a) Squirrels.
(b) Salamanders.
(c) Chipmunks.
(d) Toads.

9. When Gus wakes up in "I Reckon" why doesn't he know what time it is?
(a) The fog is so thick, that he can't tell if it is day or night.
(b) His watch is missing.
(c) His head hurts so much that he can't read his watch.
(d) He does not know how long he slept.

10. What does Gus state about his fishing memory?
(a) He recalls very little.
(b) He can remember every number of fish he caught.
(c) He only remembers the large fish he catches.
(d) He recalls every detail that pertains to fishing.

11. What happens in the barroom during the honeymoon of Henning and Carolina?
(a) Carolina punches Henning in the nose.
(b) Carolina and Henning call a truce.
(c) Henning admits to lying about the number of fish he caught on the honeymoon.
(d) Carolina admits Henning is a better fisherman.

12. What does Gus do about his depression?
(a) He goes to see a psychiatrist.
(b) He cuts himself off from all humans.
(c) He visits home.
(d) He fishes less and socializes more.

15. What confused Ma about the famous book "The Complete Angler" that Henning gave her to read?
(a) The language.
(b) The s's looked like f's.
(c) The ideas.
(d) The reason why Henning owned it.

1. What did Bill Bob spread all over him that Gus had given him in exchange for a check?

2. How do Zeke's two installments of the story differ?

3. How does Gus believe that he becomes a fishing prodigy?

4. What happens between Carolina and Henning the night they first meet?

5. What does Ma say happens on the otter hunt?