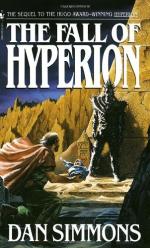 2. Who is responsible for extracting every piece of the cruciform from the victim's body in Chapter 9?
(a) Nemes and her cyborgs.
(b) The Shrike.
(c) Raul.
(d) Isosaki.

3. What is the name of the compound created for architectural students called?
(a) Taliesin West.
(b) Talisein East.
(c) Tahitian West.
(d) Tahiti Miti.

1. How many times has Pope Julius XIV died according to Chapter 1?

2. With whom does Raul have a series of dream conversations?

3. What happens to Raul after he drank water upon arriving to Lock Childe Lamonde?

1. Who is Rachel Weintraub?

2. How is Isosaki's group, Pax Mercantilus, demonstrative of a writing flaw in Simmon's writing?

3. What is Task Force GIDEON?

5. Describe the beginning of the Pax's raids in Chapter 9.

6. According to Raul, what does Father Clifton's doctrine prompt?

7. What is ironic about Raul's affliction?

8. What happens to Raul at the Temple Hanging in the Air?

10. Describe what Raul calculates in Chapter 16.

The Rise of Endymion from BookRags. (c)2021 BookRags, Inc. All rights reserved.