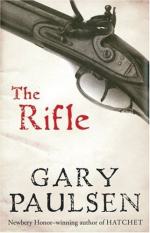 Gary Paulsen
This set of Lesson Plans consists of approximately 117 pages of tests, essay questions, lessons, and other teaching materials.

Describe the appearance of the rifle. Explain why it looks the way that it looks.

Describe the process of loading a muzzle-loading rifle. Describe why John Byam loaded the rifle the way that he did.

Describe the processes that Cornish McManus used to manufacture the rifle.

Cornish McManus is described as an excellent gunsmith but an indifferent shot. Discuss how it is possible to be very good at one thing but not very good at something else that is closely associated.

The novel argues that during the Colonial period rifles were needed tools but that in today's society they are no longer useful. Discuss this contrast.

The novel portrays the British during the American Revolutionary War as violent and foolhardy. Do you agree with this portrayal? Discuss why enemy troops always are vituperated in the media...