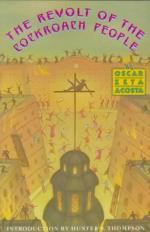 The Revolt of the Cockroach People Test | Mid-Book Test - Medium

1. What does the prisoner testify about Fernandez's blanket?
(a) It wasn't cut up.
(b) It was made from very thin material.
(c) He wasn't tied up.
(d) It was hanging from the light.

2. What was Robert's condition before the police killed him?
(a) He was unconscious.
(b) He was high.
(c) He was depressed.
(d) He was stoned.

3. What did Robert's family notice on Robert's face at his funeral?
(a) Red scratches.
(b) Scars.
(c) Purple spots.
(d) Bruises.

1. What name does Brown say he will give if the police catch him?

2. In which Los Angeles park does Brown's sister live?

3. What is the group tense about?

4. According to Brown, what kind of people populate the surrounding area?

5. Whom does Brown think will now win the elections?

1. Describe the meeting between Brown and the Chicano Militants in this section?

2. What problems do Brown and the law students cause Cardinal McIntyre in this section?

3. How does the author describe the area surrounding St. Basil's church?

4. What agreement does Brown make with Gilbert in this section?

5. Why does the court issue a restraining order against the East LA Thirteen?

6. Why did the police arrest Robert Fernandez?

7. Why does Brown decide to move away from his sister?

8. What does Mickey De Silva say he remembers about the night Robert supposedly hanged himself?

9. How does Manny claim racism has stopped him from becoming famous?

10. What does the group find when they walk into the parking lot?

The Revolt of the Cockroach People from BookRags. (c)2022 BookRags, Inc. All rights reserved.