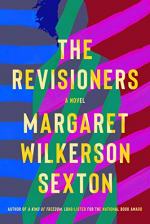 2. Josephine tells Louis that she does not need to have attended school to know that if "you talk to a white man like you got some sense, and he'll" take what action against "your head" (211)?
(a) Smash it.
(b) Blow it wide open.
(c) Bury it.
(d) Cut it off.

5. Eliza blames which member of her family for leading Major astray in his decision-making?
(a) Her father.
(b) Her uncle.
(c) Her mother-in-law.
(d) Her brother.

6. When Ava has a vision of an object hanging from the oak tree in Grandma Martha's yard, what does she discover the object is when she forces herself to look again?
(a) Clumps of moss.
(b) A bird feeder.
(c) A bird house.
(d) A ladder.

7. For how long has Grandma Martha been missing by the time Ava is notified by phone?
(a) Days.
(b) Hours.
(c) Minutes.
(d) Weeks.

8. Jupiter tells Winnie that he will change whose mind for her if she allows him to join the Revisioners?
(a) Missus's.
(b) Sally's.
(c) Domingo's.
(d) Fred's.

10. On what part of Charlotte's body does Josephine first notice an injury inflicted by Vern?
(a) Her arm.
(b) Her nose.
(c) Her eye.
(d) Her ankle.

12. Which character does Jericho mention during the game of whist that causes Josephine to pace the floor all night?
(a) Winnie.
(b) Missus.
(c) Sally.
(d) Tom.

15. Josephine remarks to herself during the exchange between Major and Vern at Major and Eliza's door that she feels what way about Major's display of respect to Vern?
(a) Proud.
(b) Sad.
(c) Disappointed.
(d) Angry.

1. Which other character is in the car with Ava when she finds a series of missed calls about Grandma Martha?

2. With what activity does Charlotte say she has been busy when she says that she will try to visit Josephine the following day?

4. Josephine offers to bring what objects for Vern's perusal before he rejects her offer?

5. When Josephine talks to Major about survival, she knows that which other character is also listening?

More summaries and resources for teaching or studying The Revisioners.

The Revisioners from BookRags. (c)2022 BookRags, Inc. All rights reserved.