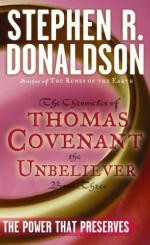 The Power That Preserves Chapter Abstracts for Teachers

• Thomas Covenant is a leper who has spent time in a place called the Land, a place he is certain exists only in his mind.

• Even though Covenant doesn't believe the Land is real, he loves the place and goes on a journey to destroy Lord Foul, an enemy of the Land.

• Covenant saves the land and is given a choice to live in the Land and be cured of his leprosy or return to his own world.

• He decides to return to his own reality and is glad to be alive.

• Thomas has only been in his world for a few days and he is trying to adjust.

• A phone call from Covenant's lawyer awakens him.

• At first he thinks the voice sounds like Elena, his daughter from the Land.

• While Covenant guiltily remembers his part in Elena's death, it takes a moment for him...

More summaries and resources for teaching or studying The Power That Preserves.

The Power That Preserves from BookRags. (c)2021 BookRags, Inc. All rights reserved.