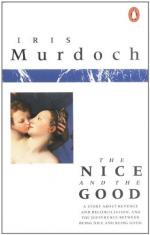 The Nice and the Good Chapter Abstracts for Teachers

Iris Murdoch
This set of Lesson Plans consists of approximately 100 pages of tests, essay questions, lessons, and other teaching materials.

• Government worker, Octavian Gray hears a gunshot from the offices below.

• Octavian's undersecretary, Richard Biranne, tells Gray that a man called Radeechy has shot himself in the vaults.

• Biranne offers to stay and wait for the police, but Octavian says he can deal with the situation himself. Biranne asks Octavian to mention that he did not touch the gun.

• Octavian phones his wife Kate to say he will be will not be home until late.

• At the Gray Estate in Dorset, Edward and Henrietta Biranne and Mary Clothier talk in the kitchen. Theo enters and asks where Mary's son Pierce is.

• Kate tells Mary that her husband is working late at the office because of a suicide, but he is coming back with a man called John Ducane. The women go upstairs to prepare for Ducane's arrival.

• John Ducane is with his lover Jessica...