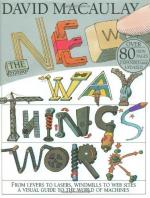 David Macaulay
This set of Lesson Plans consists of approximately 118 pages of tests, essay questions, lessons, and other teaching materials.

2. What happens after an analog quality is turned into binary code?
(a) It can be sent out in electrical pulses to be stored and processed.
(b) It becomes digital.
(c) It is no longer available to be translated.
(d) It is then processed into tertiary code for better transmission rates.

3. What is one phenomenon a measurement of force measures?
(a) Vise pressure.
(b) Pull pressure.
(c) Earthquakes.
(d) Push pressure.

5. What is it called when levels rise and fall continuously?
(a) Variable.
(b) Digital.
(c) Static.
(d) Analog.

6. What happens when orbiting electrons are energized so that they jump away from their nucleus and then fall back?
(a) They exchange energy with the nucleus.
(b) They lose their rotation pattern.
(c) They burn out.
(d) They emit a ray of light on impact.

10. What traumatizes the mammoth?
(a) Having its hair cut.
(b) Being taken into virtual reality.
(c) Seeing the dead mammoths all around.
(d) Having its tusks shrink.

13. What happens when electrons are rubbed, shuffled, or brushed off one surface onto another?
(a) Homogenization.
(b) Static electricity.
(c) Homeostasis.
(d) Hydrogenation.

1. What charge do untouched electrons carry?

2. How do oppositely charged electrons respond to each other?

3. What is the distance between each peak of energy in a wave?

4. How are signals and messages created out of light and radio waves?

5. What do sensors and detectors measure?