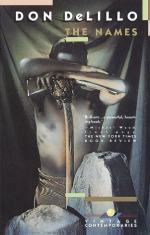 Don Delillo
This set of Lesson Plans consists of approximately 131 pages of tests, essay questions, lessons, and other teaching materials.

Spend a class period in which students explore different languages. Assign each a statement that a world traveler might need, and have him or her do research to determine how to say the phrase in French, Spanish, German, Greek, Arabic, Farsi, Hindi, Chinese, and Japanese.

At the beginning of the class's study of Don DeLillo's The Names, place a map at the front of the room (circa 1980) and place a mark on it for every location that James visits in the book. After the study is done, figure out the farthest east, west, north, and south he goes.

The Names is an earlier, more genre-based work by Don DeLillo, a man whose prose has become synonymous with modern American paranoia. As a class, read excerpts from some of DeLillo's later acclaimed works - White Noise, Mao II, Libra, Underworld, and Falling...

The Names from BookRags. (c)2021 BookRags, Inc. All rights reserved.