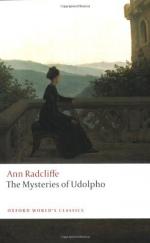 Ann Radcliffe
This set of Lesson Plans consists of approximately 173 pages of tests, essay questions, lessons, and other teaching materials.

1. Why does Montoni refuse Emily's request to leave Udolpho?
(a) She refuses to relinquish her aunt's estates.
(b) He wants her to get over her grief before she travels.
(c) He wants to marry her now.
(d) He wants her to marry Orsini.

3. What does Emily see in Chapter One of Volume Three that makes her faint?
(a) A bloody corpse.
(b) A pirate wielding a large sword.
(c) Valancourt.
(d) Her aunt chained to a wall.

4. In Chapter Eight of Volume Three, who promises to help Emily escape from Udolpho?
(a) Bertrand.
(b) Carlo.
(c) Ludovico.
(d) Annette.

5. When Montoni grants Emily permission to visit her aunt, in what state does Emily find Madame Montoni?
(a) Wounded and losing a lot of blood.
(b) Very sick and emaciated and clearly near death.
(c) Hysterical and unable to stop screaming.
(d) Bound and gagged.

1. Who does Emily hear arguing with Montoni about a former promise regarding her?

2. Where does Emily go to avoid an unwanted suitor in Chapter Seven of Volume Four?

3. Who escorts Emily and Maddelina when they take walks together?

4. Who reveals that he is the figure on the ramparts and the disembodied voice from a chamber between the walls at Udolpho?

5. Where does Emily think she spies Valancourt in Chapter Ten of Volume Four?

2. What story does Sister Frances relate to Emily to explain how Sister Agnes became insane?

3. In Chapter Nine of Volume Three, Emily composes a poem called "The Mariner". What role do Emily's poems play throughout the story?

4. What seemingly supernatural figure does Emily see in Chapters Two and Three of Volume Three?

5. What is Monsieur Quesnel's response to Emily's letter in Chapter Twelve of Volume Three?

6. In what ways is Blanche a mirror of Emily's character?

7. What is ironic about Emily's being sent to Tuscany for safety when castle di Udolpho is attacked?

8. Explain the mystery of the prisoner in the castle.

9. Is Valancourt a perfect hero or does he have flaws and weaknesses?

10. What seemingly supernatural event occurs when Montoni harasses Emily the estates she has inherited from her aunt?

More summaries and resources for teaching or studying The Mysteries of Udolpho.

The Mysteries of Udolpho from BookRags. (c)2022 BookRags, Inc. All rights reserved.