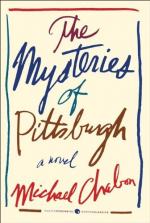 The Mysteries of Pittsburgh Fun Activities

Michael Chabon
This set of Lesson Plans consists of approximately 124 pages of tests, essay questions, lessons, and other teaching materials.

Imagine that you could have a conversation with Michael Chabon's laptop. What do you think it would say? What questions would you ask?

The Mystery of Pittsburgh Soundtrack

Research the music of the late-1980s and create a CD which could be a background for the lives of Art and the other characters.

The author names his characters to embody their personalities and the time in which they lived. What alternate names can you suggest for the main characters if they were to live in the 21st century?

The Art of Being Art

The Mysteries of Pittsburgh from BookRags. (c)2021 BookRags, Inc. All rights reserved.