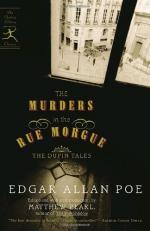 The Murders in the Rue Morgue Test | Mid-Book Test - Easy

1. What is the first event that leads to Dupin analyzing a thought that the narrator has?
(a) Somebody walked by drinking alcohol.
(b) An actor walked by.
(c) A policeman stopped to talk to them.
(d) Somebody bumps into the narrator.

2. Which of the following words did the policeman hear from outside the crime scene?
(a) Love.
(b) Sacre.
(c) Disturb.
(d) Deja.

3. What language did the policeman believe the second voice was speaking?
(a) Spanish.
(b) Italian.
(c) English.
(d) French.

4. What does Dupin want the person of interest to tell him?
(a) The details of the murder.
(b) Who he should contact for more information about the murder.
(c) Why he killed the victims.
(d) Who the real killer is.

5. How did the second person interviewed know one of the murder victims?
(a) He carried her items home for her.
(b) He painted her portrait.
(c) He moved her furniture into the house.
(d) He once sold to her.

6. Who does Dupin explain his hypothesis to first?
(a) The sailor.
(b) Adolphe.
(c) The Narrator.
(d) The salesperson.

7. Who does the narrator describe as having an analytical mind?
(a) One of the murder victims.
(b) Himself.
(c) Dupin.
(d) The sailor.

9. Who is first interviewed about the murders?
(a) A laundress.
(b) Dupin.
(c) The narrator.
(d) A tobacco salesman.

10. What happened to the man who helped the person of interest obtain the animal?
(a) He wanted to kill the animal.
(b) He couldn't take the animal home with him.
(c) They got into a fight.
(d) He died.

11. Which character can be compared to Sherlock Holmes?
(a) The sailor.
(b) Dupin.
(c) The Narrator.
(d) The policeman.

12. How did the policeman describe the second voice he heard inside the Rue Morgue?
(a) Italian.
(b) Quiet.
(c) Gruff.
(d) Shrill.

14. What did the police note about the windows at the Rue Morgue?
(a) They were the method of escape for the murderer.
(b) They were impossible to escape from.
(c) They had been replaced.
(d) They had been broken.

15. Which of the following does the Narrator claim is an admirable skill?
(a) Calculation.
(b) Analysis.
(c) Memorization.
(d) Charisma.

1. What is the occupation of the second person interviewed about the murders?

2. What evidence exists against Adolphe?

3. What is the epigraph's message to the reader?

4. What does Dupin tell the person of interest that he has?

5. What is Dupin's first initial?

More summaries and resources for teaching or studying The Murders in the Rue Morgue.

The Murders in the Rue Morgue from BookRags. (c)2022 BookRags, Inc. All rights reserved.