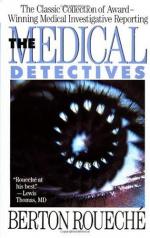 Berton Roueché
This set of Lesson Plans consists of approximately 105 pages of tests, essay questions, lessons, and other teaching materials.

1. What caused others to see that Sandy was ill during a public performance with others?
(a) She fainted.
(b) She couldn't walk straight.
(c) She vomited.
(d) She began to babble incoherently.

2. What did Betty decide to do in order to get over her symptoms and her medical condition?
(a) Get more exercise.
(b) Nothing.
(c) Take a leave from her job.
(d) Take vitamins.

3. What did Natalie find out was given to her in order to help her depression, though this left her unaware of where she was?
(a) Medication.
(b) Hallucinogens.
(c) Electro-shock treatments.
(d) An injection of morphine.

5. What was aired out before Betty's husband came, which is why he didn't have the same symptoms as she did?
(a) Spoiled milk.
(b) Water.
(c) Paint fumes.
(d) Insecticide.

6. How is babesiosis generally spread, according to the book and to scientists?
(a) Mosquitoes.
(b) Dogs.
(c) Cats.
(d) Ticks.

8. When did Betty's husband come up to the cottage in order to spend the weekend with her?
(a) Saturday.
(b) Monday.
(c) Friday.
(d) Sunday.

10. Where was Natalie employed before she could not work anymore as a result of her condition?
(a) St. Sebastian's.
(b) Home.
(c) Recovery Academy.
(d) Department of Commerce.

11. What was the original diagnosis for Rudy's inability to smell or to taste anything pleasant?
(a) A cold or flu.
(b) Nothing.
(c) Pneumonia.
(d) Sepsis.

12. What was the initial method that Sara used in order to treat her rash?
(a) Hot baths.
(b) Nothing.
(c) Baking soda.
(d) Cortisone cream.

13. Two prominent doctors from the University of _________ School of Medicine were unable to determine what was wrong with Richard.
(a) North Dakota.
(b) South Dakota.
(c) Michigan.
(d) Kentucky.

14. What is NOT one of the samples taken from the infant in order to find out what was wrong in order to choose the right treatment?
(a) Hair.
(b) Mucus.
(c) Stool.
(d) Blood.

15. What ended up being the specific term for the infection that was killing the babies?
(a) Influenza A.
(b) Pseudomonas.
(c) Cystitis.
(d) Reterovirus.

1. What is NOT one of the symptoms Betty experienced when she was first ill and nothing was found to be wrong with her?

2. The course of investigation into the hepatitis outbreak resulted in the establishment of a _________ of infection.

3. One female patient got reactive to metals after having __________ implanted during a surgery.

4. What was the only thing Rudy was able to eat, but only in very small amounts?

5. Natalie participated in what profession before she went through her horrifying ordeal?