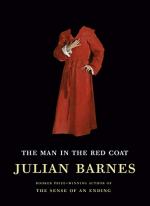 The Man in the Red Coat Test | Mid-Book Test - Medium

Julian Barnes
This set of Lesson Plans consists of approximately 90 pages of tests, essay questions, lessons, and other teaching materials.

1. How was Samuel Pozzi injured in the Franco-Prussian War?
(a) A horse-drawn ambulance ran over his ankle.
(b) He was shot.
(c) His ribs were broken when he fell off a cliff.
(d) He broke his leg in a trench.

4. Who was Pozzi's cousin that was 20 years his senior and a well-known society doctor whose patients including the ruling family of Napoleon III?
(a) Jean Lorrain.
(b) Georges-Charles de Heeckeren.
(c) Edmond de Polignac.
(d) Alexandre Laboulbene.

1. Who was the mother of Caliban in The Tempest?

2. Who was put on trial for having translated Emile Zola's La Terre to English?

3. Who painted the 1898 portrait of Jean Lorrain that is featured in the book?

5. How old was Montesquiou when he traveled to London in 1885?

2. From where do the portraits of a number of celebrities in the book arise?

3. What painting inspired the author to write this book? Why?

4. Who was Jean Lorrain?

5. What does a dandy refer to?

6. What caused the initial problems between Dr. Pozzi and his wife?

7. What does Listerism refer to?

8. What literary device does the author reference and explain in the opening of the narrative?

9. How does the author compare the sexual perspectives of those from England and those from France in the late nineteenth century?

10. Who was Guy de Maupassant?

More summaries and resources for teaching or studying The Man in the Red Coat.

The Man in the Red Coat from BookRags. (c)2021 BookRags, Inc. All rights reserved.