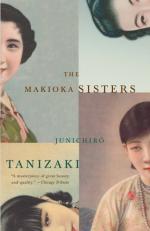 1. What do Taeko, Sachiko and Teinosuke think during the dinner?
(a) That the hosts talk too much.
(b) That the house is too small.
(c) That the food is too cooked.
(d) That the portions of food are too large.

2. Who is absent when Taeko, Sachiko and Teinosuke arrive for dinner?
(a) Katherina's mother and brother.
(b) Tatsuo.
(c) Mr Sagoshi.
(d) Yukiko.

5. Why are Sachiko, Taeko, Yukiko and Etsuko stopped and asked to be photographed?
(a) They wear western clothes.
(b) They are four beautigful women traveling alone.
(c) They are the only women on the train.
(d) They wear traditional Japanese dresses.

1. When does Sachiko plan on returning to Osaka?

2. What does the visitor inquiring about Taeko bring?

3. How does Sachiko's party go to Tokyo?

4. What does Sachiko decide while looking at the picture?

5. What is not a crucial objection about Nomura?

2. What part of Etsuko's composition does Yukiko cross out in Chapter 8?

3. Where does Sachiko arrive in Chapter 15?

4. What is Sachiko looking forward to in Chapter 14 and why?

5. What does the dance recital show about Taeko in Chapter 3?

6. Who is Mrs. Itani according to Chapter 2?

7. What problem revolves around Yukiko according to Book I, Chapter 1?

8. What opinion does Yukiko have on the marriage issue in Chapter 17?

9. Who is O-Haru and what traits did she possess based on Chapters 4 and 5?

10. Why does the meeting with Nomura not go well in Chapter 28?