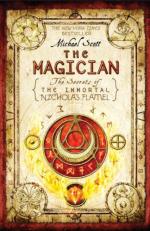 3. What is the object related to that Flamel recovers from his old home?
(a) Excalibur and Clarent.
(b) The cuffs of Zeus.
(c) The Green Knight's girdle.
(d) The book of Abraham.

4. What has Joan taught Sophie?
(a) How to play an ancient stones game.
(b) How to endure nightmares with no ill effect.
(c) How to use Sophie's mind more effectively.
(d) How to deal with the memories of the Witch of Endor.

7. What happens at the spot where Josh stabs the Nidhogg?
(a) It falls off.
(b) Nothing; his sword cannot penetrate its hide.
(c) It turns to stone.
(d) It quickly heals over.

8. Who finds Machiavelli's burned out car?
(a) The French Secret Police.
(b) The one Disir still living.
(c) The Dark Elders.
(d) Joan when she is tracking Josh.

10. What do Machiavelli and Dee discuss?
(a) The best way to deal with Flamel's group.
(b) Whether they really want to engage in a confrontation with Flamel.
(c) Whether to wait until Perenelle has joined them.
(d) Whether to just try to get the twins away from the others.

11. Why is Josh nervous?
(a) He does not know if he can handle power.
(b) He is unsure about the influence of Clarent on his mind.
(c) He is afraid of Sophie being harmed.
(d) He is claustrophobic.

12. What happens when the Nidhogg is stabbed in the tongue?
(a) It bites down on Scathach.
(b) It spits poison.
(c) The tongue turns black.
(d) It attacks Josh.

15. What happens as Josh prepares to kill the Nidhogg?
(a) The Disir attacks him.
(b) Scathach is thrown down the road.
(c) The Disir kills the creature instead.
(d) Scathach kills it.

1. What happens after Dee and Machiavelli jump out of their car?

2. What does Joan teach Sophie about Sophie's aura?

3. How does Josh feel from the use of Clarent?

4. Who continues to battle the Disir?

5. Why does Josh attack the Nidhogg?

The Magician from BookRags. (c)2021 BookRags, Inc. All rights reserved.