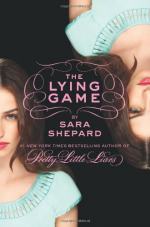 Sara Shepard
This set of Lesson Plans consists of approximately 139 pages of tests, essay questions, lessons, and other teaching materials.

Watch the pilot show for The Lying Game and write down the differences between the show and the book.

Plan out a practical joke which is completely harmless and makes fun of yourself instead of others.

Draw a picture of what you think Sutton's necklace looks like.

As a television reporter provide a detailed report with interviews of the circumstances surrounding Sutton's death.

Have everyone bring in pictures cut from magazines that illustrate their idea of what Sutton, Emma, Ethan, Garrett, Laurel, Madeline, Charlotte, Thayer, Travis, and Nisha look like.

Create a trivial game based on The Lying Game . Have the categories involve items from the book, such as high school, peer pressure, family dynamics, tennis, practical jokes, murder, secrets...

More summaries and resources for teaching or studying The Lying Game.