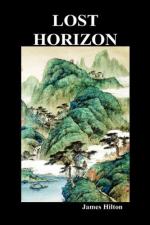 1. How does the novel begin?

Some friends have gotten together at an airport to visit for awhile. One of them, Woodford Green, is the narrator of the story.

2. Who arrives and talks about a plane that once went missing in Baskul?

Sanders, a pilot, joins the group and mentions the disappearance of the plane that never came back.

3. Who was on the plane that disappeared?

Three men and a lady missionary were on the plane and one was "Glory" Conway.

4. What is the book about that Green wrote and Rutherford had read?

It is a technical book on neurology, and Green is surprised that Rutherford had read it.

5. How had Rutherford found Conway some time ago?

By chance he sat near a Mother Superior from a Chung-Kiang hospital who told of a man fitting Conway's description.

6. Describe what it is that Rutherford leaves with Green that night.

Rutherford had written down the story Conway told him about where he had been after the plane disappeared.