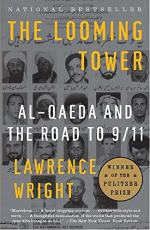 Related Topics
The End of October

Lawrence Wright
This set of Lesson Plans consists of approximately 109 pages of tests, essay questions, lessons, and other teaching materials.

6. What position was Prince Saud given by his father for the kingdom?
(a) Foreign Minister.
(b) Spymaster.
(c) Minister of Agriculture.
(d) Finance Minister.

8. What is the name of the quiet middle-class suburb where Ayman al-Zawahiri grew up?
(a) El Shorouk.
(b) Maadi.
(c) New Heliopolis.
(d) Obour.

13. Who was the Time magazine senior editor that was being questioned by the House Un-American Activities Committee when Sayyid Qutb arrived in the U.S.?
(a) Whittaker Chambers.
(b) Patrick Fitzgerald.
(c) Kenneth Karas.
(d) Alfred Kinsey.

1. Where did Azza (Dr. Ayman al-Zawahiri's wife) set up housekeeping in Pakistan?

2. Who had signed an order for Sayyid Qutb's arrest, leading him to travel to the U.S. as a student?

3. Who was the vice president of Egypt that offered Ayman al-Zawahiri and his brother Mohammed a ride home from the mosque?

4. When did Ramzi Yousef detonate a truck bomb in the parking lot of the World Trade Center?

5. How much money did Jamal al-Fadl supposedly steal from bin Laden when he ran away from his employ?

More summaries and resources for teaching or studying The Looming Tower: Al-Qaeda and the Road to 9/11.

The Looming Tower: Al-Qaeda and the Road to 9/11 from BookRags. (c)2022 BookRags, Inc. All rights reserved.