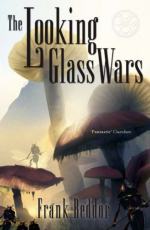 Frank Beddor
This set of Lesson Plans consists of approximately 118 pages of tests, essay questions, lessons, and other teaching materials.

1. Where does the remaining army of Queen Geneveive escape to?
(a) The Valley of the Mushrooms.
(b) The Everlasting Forrest.
(c) The Pool of Tears.
(d) The Volcanic Plains.

2. What happens when Redd claims the Heart Crystal and the queendom?
(a) The crystal turns red.
(b) There is a small earthquake.
(c) The crystal burns everyone.
(d) The crystal makes Redd shake.

3. Who is Alyss irritated with because she was expecting them to be with her while she watched the parade?
(a) Dodge Anders.
(b) Queen Genevieve.
(c) Bibwit Harte.
(d) King Nolan.

4. Why is King Arch eager to get back to the celebration of Alyss' birthday?
(a) He wants to celebrate his treaty with King Arch.
(b) Because he is afraid Alyss would never forgive him for missing it.
(c) He wants to make sure he makes it for the birthday cake.
(d) Because he hates traveling during the holidays.

5. What are the two inventions sent into the Heart Crystal during the Inventors Parade?
(a) Floating boots and hula-hoop.
(b) Fur blanket and sprinkler.
(c) Parachute and hula-hoop.
(d) Pogo stick and parachute.

1. What does Redd's reign thrive on?

2. What does Dodge give to Alyss for her birthday?

3. Why does Hatter run away when he finds himself in Paris, France?

4. According to the adults of Wonderland, what must one train imagination for?

5. What did Redd do as a form of revenge for having the crown taken away from her?

1. What does Alyss turn Bibwit’s piece of cake into?

2. What does the golden kitten’s name tag read?

3. What does Alyss have to do when she spells her name wrong in England?

4. Where does Jack want to send Dodge as punishment?

5. What does Dodge place on his father’s grave?

6. Why is silence outlawed after Redd takes over?

7. How does Redd justify her behavior as a young child?

8. How does Hatter escape from his captors in France?

9. How is Hatter captured in France?

More summaries and resources for teaching or studying The Looking Glass Wars.