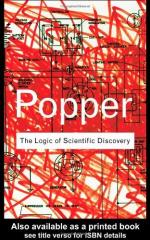 Karl Popper
This set of Lesson Plans consists of approximately 102 pages of tests, essay questions, lessons, and other teaching materials.

2. What type of numerical interpretation requires that probabilities be only expressed as frequencies?
(a) Non-empirical.
(b) Subjective.
(c) Psychological.
(d) Objective.

3. What does Popper feel about an axiom in relations of von Mises view of an axiom of randomness?
(a) It is a weak construct.
(b) It is self-contradicting.
(c) It is a powerful construct.
(d) Mathematical validity is high.

5. What is used to make laws based on observations?
(a) Theory.
(b) Simplicity.
(c) Conventionalism.
(d) Probability.

6. How do conventionalists define simplicity?
(a) As a unified practice.
(b) Unpractical.
(c) Aesthetic and practical.
(d) As a means to an end.

8. What is directly linked to falsification?
(a) Theory.
(b) Statements.
(c) Testability.
(d) Logic.

9. Who does Popper suggest works in probabilistic logic to determine the probability of a hypothesis?
(a) Inductivists.
(b) Positivist.
(c) Conventionalists.
(d) Metaphysicists.

12. What is the most significant factor when selecting a theory?
(a) Previous research.
(b) Its universality.
(c) The degree of testability.
(d) The understandability.

15. What scientific thought suggests that probability can be regarded as a generalization of the concept of a singular truth?
(a) Naturalism.
(b) Conventionalism.
(c) Inductivism.
(d) Positivism.

1. What theory does Heisenberg begin this investigation with?

2. What does Popper eliminate from the common frequency theory by using mathematical and narrative approaches?

3. What does Popper assume is a main characteristic of quantum theory formula?

4. Why does Popper find Heisenberg's lack of logic and statistical testing disturbing?

5. What principle does science presuppose?

The Logic of Scientific Discovery from BookRags. (c)2020 BookRags, Inc. All rights reserved.