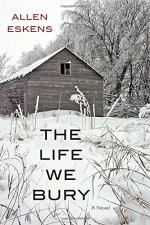 Allen Eskens
This set of Lesson Plans consists of approximately 143 pages of tests, essay questions, lessons, and other teaching materials.

1. Who is with Joe's mother when she finally arrives back home after the smoke alarm was set off?

2. What is the secret Joe blurts out to Carl?

3. How was Berthel Collins involved in Carl's case?

4. Where does Joe currently work?

5. Who was Carl Iverson found guilty of murdering?

2. Why does Joe Talbert visit Hillview Manor at the beginning of the book?

3. Why does Terry Bremer call Joe when his mother does not come home?

4. What does Joe's mother say that she knows will cause Joe to feel guilty?

5. In Chapter 4, Joe finds a photograph of Carl Iverson being taken into custody. What does he see when he looks at Carl's face in the photo?

6. How does Joe resolve his guilt of leaving Jeremy with his mother and Larry?

7. Virgil accuses Joe of using Carl. Is this true?

8. What illness does Carl Iverson have? Is he recieveing treatment?

9. How does Joe end up interviewing Carl Iverson?

10. Why is Carl's request for a speedy trial something that his defense considered unusual?

Each time Joe is presented with a threatening male figure his first instinct is to use violence to express his anger, yet when he is confronted by both Doug and Danny he is unable to defend himself. Why might the author have written the character of Joe in this way? What does Joe's ability to fight say about him? In what circumstances does he usually resort to violence? Why is it that when it comes to defending himself, as opposed to someone else, he is not able to do it?

Who is Virgil Gray and why is he important to the story? How does Virgil act as a bridge between Joe and Carl? Without Virgil would Joe have taken the time to find out more about Carl as a person?

Lila Nash comes to Joe Talbert's house one night for a spaghetti dinner. While she is there they argue about Carl Iverson and if he will tell the truth to Joe when it comes to Crystal Hagen's murder. Lila seems intent on arguing with everything Joe says. How is their argument about Carl a metaphor for their relationship at the moment? How does Lila try to stop Joe from wanting to get to know her? Does it work? Why or why not?

The Life We Bury from BookRags. (c)2022 BookRags, Inc. All rights reserved.