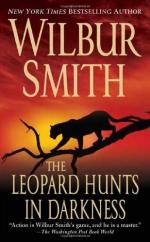 1. How does Colonel Nikolai Bukharin intend to find Peter guilty?
(a) By arresting him.
(b) By torturing him.
(c) By sending Botwana police after him.
(d) By befriending him.

3. When Sarah finds Craig and Sally-Anne what do they plan together to do?
(a) Return to King's Lynn.
(b) Bring Peter to justice.
(c) Rescue Tungata.
(d) Leave the country.

4. What progress has Craig made in reaching Lobengula's tomb now that they have the oxygen tanks from the plane?
(a) He has been inside the tomb several times.
(b) The entrance has been completely cleared.
(c) Several stones have been moved from the entrance.
(d) He found a secret passage to the tomb under the water.

5. After they rescue Tungata from prison, where do Craig and the group hide until Peter's soldiers are done looking for them?
(a) In Vusamanzi's house.
(b) In caverns shown to them by Vusamanzi.
(c) At a mission station.
(d) The property behind King's Lynn that was poached.

1. After traveling through the desert and being near exhaustion, why do Craig and Sally-Anne abandon the rifle and ammunition they are carrying?

2. What does Tungata find when he reaches Lobengula's tomb where the diamonds are hidden?

3. How does Tungata know for sure that Sarah has been released safely?

4. Where are King Lobengula's remains and the diamonds hidden?

5. Who has frozen all Craig's assets and bank accounts and put a hold on all the royalties from his future book?

1. Why do Craig and Tungata leave the cavern?

2. When Sarah meets Craig and Sally-Anne at the hotel, what does she tell them about Tungata?

3. How do Craig and Sally-Anne try to survive until they reach Botswana?

4. How do Sally-Anne, Sarah and Craig prepare for their trip to Zimbabwe?

5. What is Tungata's state since going to prison?

6. Explain the sacrifice Captain Nbebi makes for Craig and Sally-Anne.

7. What parts of the Zimbabwe terrain help or hinder their get away?

8. What are Craig, Sally-Anne, Tungata and Sarah's escape options?

9. Describe the contains of Nikolai's briefcase.

10. How do Craig, Sally-Anne, Sarah and Tungata spend their time in the caverns?