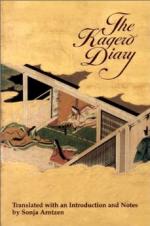 Fujiwara courted MM when she was nineteen by alternately sending her poetry and aggressively pursuing her through her father. Although MM was uneasy about him and his attentions, she was pressured into sending Fujiwara's letters. She remained as distant as she could. When her father left for business and asked Fujiwara to take care of her, Fujiwara married her immediately.

2. How did MM's initial impressions of Fujiwara compare to her feelings for him after their marriage?

MM realized, looking back on her past, that her feelings of mistrust about Fujiwara from their courtship had been well-founded, suggesting that their future marriage would not be a happy one. She admitted to feeling betrayed by him. She couldn't keep herself from crying when she saw him.

3. What was the significance of MM giving birth to Michitsuna so quickly after her marriage?

The fact that she had Michitsuna exactly nine months after her marriage revealed that her unwilling marriage to Fujiwara had become sexual almost immediately. This suggested, along with his frequent abandonment of her after the birth of their child, that Fujiwara had married MM primarily because of his physical attraction to her.