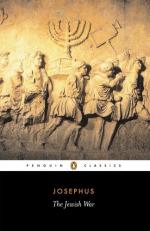 Josephus
This set of Lesson Plans consists of approximately 98 pages of tests, essay questions, lessons, and other teaching materials.

1. What made Hyrcanus ineligible to be a high priest?
(a) He was married.
(b) He did not attend the right school.
(c) He was not circumcised.
(d) He ears were mutilated.

4. What did Archelaus fear with the arrival of Passover?
(a) That the water would be contaminated.
(b) That the Temple would not have enough money.
(c) That his soldiers would be overwhelmed.
(d) That the food supply would run out.

5. What did Albinus allow in Judea?
(a) The Temple to collect taxes.
(b) The Jews to recruit an army.
(c) The Jews to give to the Temple.
(d) Robbery, looting, and excessive taxes.

1. Why did Hyrcanus abdicate his throne?

2. What was Flavius Josephus trained to be?

3. What was Flavius Josephus rewarded with for helping Rome?

4. What did banning sacrifices for Caesar and Rome mean for Jerusalem?

1. Who was Hyrcanus, and why was he killed?

2. What did the soldiers who surrounded the Jews demand, in Section 3?

3. Who captured Josephus, and what did he prophesy?

5. What did King Agrippa do when Vespasian arrived?

6. What did King Agrippa send to the Temple?

7. Where did Josephus seek refuge and why?

8. Who was Albinus, and how did he cripple the nation?

9. What did Antigonus do to Hyrcanus?