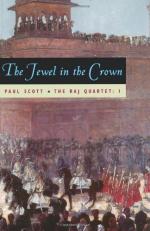 The Jewel in the Crown Test | Final Test - Medium

Paul Scott
This set of Lesson Plans consists of approximately 129 pages of tests, essay questions, lessons, and other teaching materials.

3. What does Reid first suggest to Robin White in "Civil and Military"?
(a) To use a strong hand.
(b) To hire an outside firm.
(c) To spend more on weapons.
(d) To decrease the number in the army.

5. In "Young Kumar," what does the narrator say Hari's father's inheritance was contingent upon?
(a) His marrying an American.
(b) His becoming a laywer.
(c) His staying in India.
(d) His traveling to England.

1. Why is Vidyasagar arrested?

2. In "Young Kumar," what does the narrator claim Hari learned after his father's death?

3. In "Young Kumar," why does the narrator say Hari's father rarely saw him as a child?

4. Why does the visitor contact Robin White in "Civil and Military"?

5. What does Menen do for a living?

1. On the night of Daphne's rape, what does Merrick tell Reid about the events?

2. In "Civil and Military," what is Brigadier Reid's role with the infantry?

3. In "Civil and Military," how does Robin White respond to Reid's memoir?

4. As a child, what is Hari's life like in England?

5. Who is Shalini Gupta Sen?

6. In "An Evening at the Club," what does the narrator say about Indian businesses after the British left?

7. In "Young Kumar," why does Hari return to India?

8. In "Civil and Military," how does Reid explain the role of the military in breaking up mobs?

9. What does Robin White tell the visitor about the role of Britain in India in "Civil and Military"?

10. What happens when Lady Chatterjee and Mr. Srinivasan first arrive at the club in "An Evening at the Club"?

More summaries and resources for teaching or studying The Jewel in the Crown.

The Jewel in the Crown from BookRags. (c)2020 BookRags, Inc. All rights reserved.