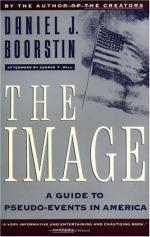 The Image: A Guide to Pseudo-events in America Quiz | Eight Week Quiz C

1. Boorstin suggests, in Chapter 1 - Section V, that the advances made in American society have served to "blur the edges of" what?
(a) Commercialism.
(b) Commerce.
(c) Reality.
(d) Truth.

2. What term means to make uniform or similar, as in composition or function?
(a) Homogenize.
(b) Conform.
(c) Amass.
(d) Uniformize.

3. What term refers to that which is of foreign origin or character, not native, introduced from abroad, but not fully naturalized or acclimatized?
(a) Exotic.
(b) Dangerous.
(c) Other.
(d) Indiginous.

4. What refers to a form of communication that is aimed at influencing the attitude of a community toward some cause or position?
(a) Newspaper.
(b) Stereotype.
(c) Propaganda.
(d) Pseudo-event.

1. What was one of Charles Lindbergh's nicknames?

2. When did Charles Lindbergh make his famous flight across the Atlantic?

3. When did Thomas Cook conduct his first train tour?

4. What first superintendent of the New Jersey State Police was best known for his involvement in the Lindbergh kidnapping case?

5. When was Mein Kampf published?

The Image: A Guide to Pseudo-events in America from BookRags. (c)2020 BookRags, Inc. All rights reserved.