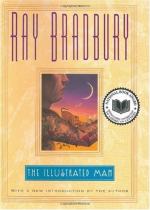 Ray Bradbury
This set of Lesson Plans consists of approximately 133 pages of tests, essay questions, lessons, and other teaching materials.

8. When Poe and Bierce enter a small valley and suddenly find themselves on a cobbled street, what song do they hear?
(a) "God Rest Ye Merry Gentlemen".
(b) "We Wish You a Merry Christmas".
(c) "Good King Wenceslas".
(d) "O Tannebaum".

13. In "The Concrete Mixer", what nationality is the young man in stories who usually thwarts a Martian invasion?
(a) German.
(b) Irish.
(c) Swedish.
(d) French.

1. What were the people called who lived on the planet where the city waits?

2. What is the Illustrated Man doing after the narrator has seen all the stories?

3. What is the name of the film director of the American motion picture company that William and Susan Travis observe?

4. How many Americans does Ettil tell his wife Tylla are killed each year in automobiles?

5. What did the Captain in "The Exiles" order at the last minute from the Historical Museum?