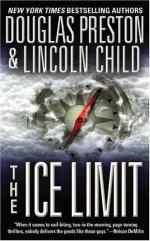 Lincoln Child
This set of Lesson Plans consists of approximately 165 pages of tests, essay questions, lessons, and other teaching materials.

1. In Chapter 76, what does Vallenar believe Captain Britton is attempting to do in the Ice Limit?
(a) Set him up for disaster.
(b) Wait for reinforcements.
(c) Dump the meteorite.
(d) Hide.

2. In Chapter 72, what does Britton believe finally proved Glinn human?
(a) Being wrong.
(b) Bleeding in an accident.
(c) Knowing more than everyone else.
(d) Admitting to his affection for her.

3. In Chapter 78, what happens each time the Rolvaag rolls against the waves?
(a) The ship vibrates in the center, threatening to rip in two.
(b) The ship rolls over on its side.
(c) The ship sinks deeper into the ocean.
(d) The ship tips forward too far.

4. In Chapter 71, why can McFarlane not use his hand held radio to contact the bridge?
(a) It could disrupt the computer systems on the bridge.
(b) The interference from salt water.
(c) Radio transmission disruption from the meteorite.
(d) The thickness of the ship's hull.

5. In Chapter 53, how long does it take for the meteorite to become settled on the tower that will lower it into the cargo hold?
(a) Forty-five minutes.
(b) Two hours.
(c) Twenty-four hours.
(d) Twenty minutes.

6. In Chapter 57, how does Glinn disable the Almirante Ramirez?
(a) By firing a weapon from the deck of the Rolvaag.
(b) By forcing it into the rocks along the cliff side of the Isla Desolacion.
(c) By sending a man to commandeer the bridge.
(d) By setting off explosive previously placed on the ship's screws.

8. In Chapter 57, what weapons system does Glinn reveal he has placed on the Rolvaag?
(a) A McDonnell-Douglas Blackout Series Wide Band ECM.
(b) An McDonnell-Douglas Automatic Chaff Deploy System.
(c) A 9mm Deck Mounted Machine Gun.
(d) An Exocet missle launcher.

10. In Chapter 65, what does Glinn realize the Almirante Ramirez has really done?
(a) Blocked off all means of escape.
(b) Trapped them against a reef.
(c) Forced them to drop the meteorite.
(d) Forced them to surrender.

11. In Chapter 45, Glinn makes a comment about the mysterious dead man in Spanish. What does this statement suggest to both McFarlane and the reader?
(a) Glinn is having a nervous breakdown.
(b) Glinn thinks the man was sent by Vallenar.
(c) Glinn speaks in Spanish when he does not want anyone to know what he is saying.
(d) Glinn has no clue who the man was or who sent him.

12. In Chapter 80, what does Britton discover missing from the main deck?
(a) Most of the maindeck.
(b) All of the crew assigned to the area.
(c) All the mining equipment.
(d) Most of the containers and several davits.

13. In Chapter 50, Vallenar learns he has been issued a second order to do what?
(a) Arrest Lloyd.
(b) Arrest Glinn.
(c) Return to base.
(d) Continue on his previous assignment.

14. In Chapter 84, what is happening to the life boats that causes concern to the survivors?
(a) They become exposed to the cold.
(b) They begin to deflat.
(c) They begin to move back toward the Ice Limit.
(d) They begin taking on water.

1. In Chapter 78, how long can the Rolvaag expect to have auxiliary power?

3. In Chapter 77, what does Britton believe will happen once the Rolvaag stops moving forward?

4. In Chapter 58, what did Lloyd do throughout the fight with the Almirante Ramirez?

5. In Chapter 44, Glinn says that the meteorite has confounded all EES expectations. What does Glinn recommend they do now?